For a quick overview of key functionality you can also view this tutorial:

This tutorial will give you a high-level tour of kamu and show you how it works through examples.

We assume that you have already followed the installation steps and have kamu tool ready.

Not ready to install just yet?

Try kamu in this self-serve demo without needing to install anything.

Don’t forget to set up shell completions - they make kamu a lot more fun to use!

When you execute kamu or kamu -h - the help message about all top-level commands will be displayed.

To get help on individual commands type kamu <command> -h - this will usually contain a detailed description of what command does along with usage examples.

Throughout this tutorial we will be using the Zip Code Boundaries dataset, which can be found on New York Open Data Portal.

To work with kamu you first need a workspace - this is where kamu will store the important information about datasets and the cached data. Let’s create one:

As you’d expect the workspace is currently empty.

One of the design principles of kamu is to always know exactly where any piece of data came from, so it never simply copies data - instead we create links to an external data (we’ll get into the details of that later). For now let’s create such link.

Datasets that ingest external data in kamu are called root datasets. To create one, we will use a DatasetSnapshot manifest from the kamu-contrib repo which looks like this:

A DatasetSnapshot manifest contains a name of the dataset, its kind (root or derivative) and a series of metadata events that define dataset’s desired state.

In this example we only have one such event - setPollingSource, which describes how kamu can ingest external data by performing following operations:

To create your own dataset manifests use kamu new command - it outputs a well-annotated template that you can customize for your needs.

Note that the data file we are ingesting is in ESRI Shapefile format, which is a common format for geo-spatial data, so we are using a special esriShapefile reader in our dataset manifest.

Let’s add it to our workspace by giving kamu this file’s URL:

At this point no data was yet loaded from the source, so let’s fetch it:

When you pull, kamu will go and check the data source for any new data that we didn’t see yet. If there was any - it will be downloaded, decompressed, parsed into the structured form, preprocessed and saved locally.

Whenever you pull data in future only the new data that kamu haven’t seen yet will be added to the dataset. In fact kamu preserves the complete history of all data - this is what enables you to have stable references to data, lets you “time travel”, and establish from where and how certain data was obtained (provenance). We will discuss this in depth in further tutorials.

For now it suffices to say that all data is tracked by kamu in a series of blocks. The Committed new block X message you’ve seen during the pull tells us that the new data block was appended. You can inspect those blocks using the log command:

Since you might not have worked with this dataset before you’d want to explore it first. For this kamu provides many tools:

To quickly preview few last events of any dataset use tail command:

SQL is the lingua franca of the data science and kamu uses it extensively. So naturally it provides you a simple way to run ad-hoc queries on data.

Following comand will drop you into the SQL shell:

Under the hood it starts Apache Spark, so its powerful SQL engine is now available to you.

All datasets in your workspace should be available to you as tables:

You can use describe to inspect the dataset’s schema:

Note the extra back ticks needed to treat the dataset ID containing dots as a table name.

For brevity you can create aliases as:

And of course you can run queries against any dataset:

Use Ctrl+D to exit the SQL shell.

SQL is a widely supported language, so kamu can be used in conjuction with many other tools that support it, such as Tableau and Power BI. Use following command to expose kamu data through the JDBC server:

The kamu sql is a very powerful command that you can use both interactively or for scripting. We encourage you to explore more of its options through kamu sql --help.

Kamu also connects the power of Apache Spark with the Jupyter Notebook server. You can get started by running:

Note: Above we do one extra thing - we tell kamu to pass the MapBox access token from the MAPBOX_ACCESS_TOKEN environment variable I have on my machine into Jupyter - we’ll make use of it later. If you don’t have a MapBox token - simply run kamu notebook.

Executing this should open your default browser with a Jupyter running in it.

From here let’s create a PySpark notebook. We start our notebook by loading kamu extension:

After this the import_dataset command becomes available and we can load the dataset and alias it by doing: 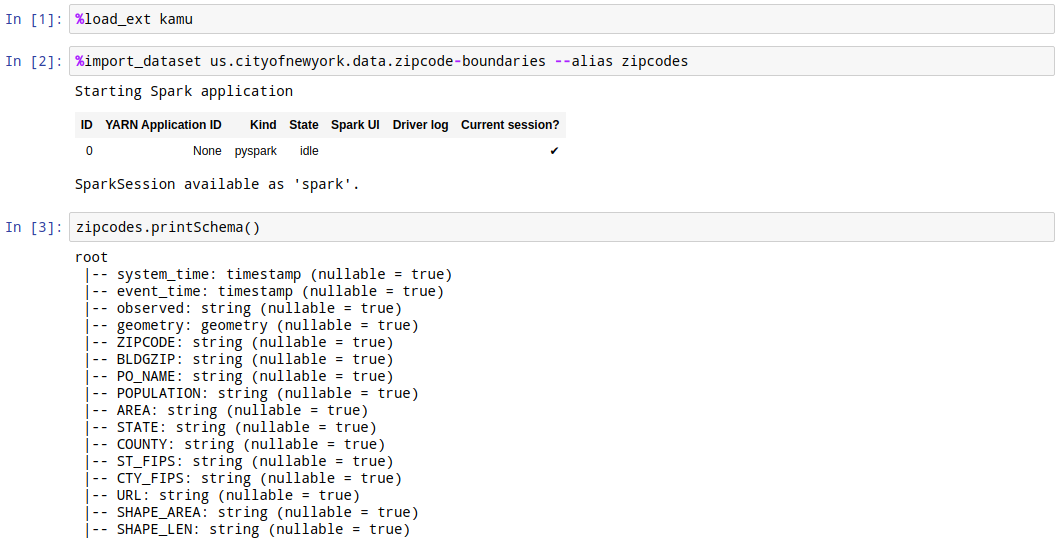 This will take a few seconds as in the background it creates Apache Spark session, and it is Spark that loads the dataset into what it calls a “dataframe”.

You can then start using the zipcodes dataframe in the exact same way you would in an interactive spark-shell.

The dataframe is automatically exposed in the SQL engine too, and you can run SQL queries using %%sql annotation:

Thanks to the sparkmagic library you also get some simple instant visualizations for results of your queries. 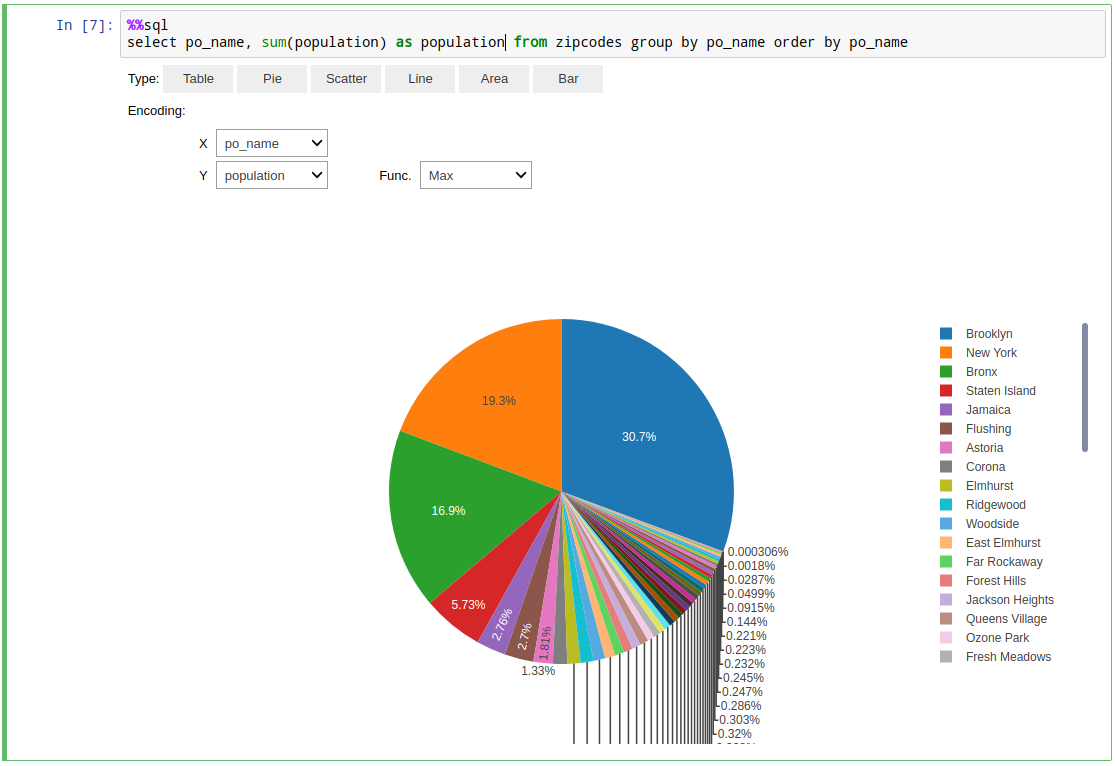 After you are done joining, filtering, and shaping the data you can choose to get it out of the Spark into the Jupyter notebook kernel.

Following command executes an SQL query and using -o count_per_zipcode transfers the result into the notebook as Pandas dataframe:

Note that we had to convert the geometry data into text here, as its stored in a binary format which Pandas doesn’t understand. We also had to change projections, which is very easy using Apache Sedona (formerly known as GeoSpark) spatial function. More on geometry later.

Now that we have the data in Jupyter - we can use any of your favorite tools and libraries to further process it or visualize it. With a little bit of tinkering we can use the mapboxgl library to display our density map as a choropleth chart: 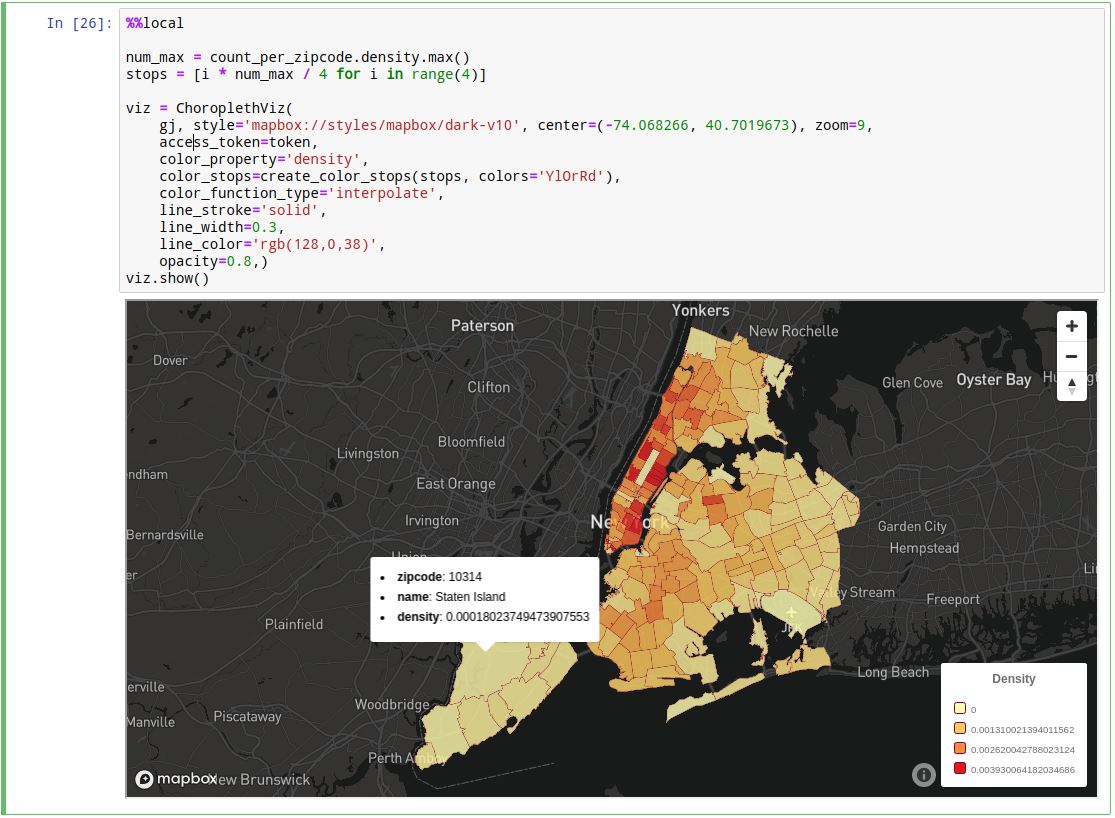 You can find this as well as many other notebooks in kamu-contrib repo.

Once your pipelines become more complex it can be really useful to explore them more visually. For this kamu comes with embedded Web UI which you can launch by running:

Don’t get distracted by the pretty notebooks and UIs though - the true power of kamu lies in how it manages data, letting you to reliably track it, transform it, and share results with your peers in an easily reproducible an verifiable way.

To learn more make sure to try the self-serve demo and check out our other learning materials!